The 'Anaconda' rapstress accused Meek of "kicking" her in front of her mother.

The 'Queen' rapstress, 37, kicked off at the 'Going Bad' hitmaker, 32, for allegedly liking a picture involving her husband Kenneth Petty. "Trigger fingers turn to #TwitterFingers bad built face a** obsessed with the Queen," she tweeted alongside a photo of Meek looking at his phone.

Minaj, who married childhood sweetheart Petty last year, then suggested her ex was still preoccupied with her life and that his pregnant girlfriend, Milan, was likely embarrassed by his behaviour.

"N***a been tweeting bout my man for a year now. Talking bout he went to my page to see him but he was blocked. My n***a, move on. I know ya b*ch embarrassed. S***ted yaself in that store when u got pressed tho."

The incident Minaj was referring to was the recent run-in she and Petty had with Meek in a clothing store last week, where the trio could be heard yelling during a heated argument.

Things soon escalated as Meek brought up Minaj's brother Jelani Maraj, who was jailed last month for repeatedly raping an 11-year-old child. Nicki clapped back by claiming Meek has physically abused her, his sister and his mother.

"You beat your own sister and taped it. Spit on her & taped it. Kicked me in front your mother and sent her to the hospital. Sucking drake d**k made u feel tough again. Move on."

Meek denied all claims of abuse made by Minaj and reused to speak about his ex-girlfriend in the future. "For clarification I don’t hit women and I won’t let my interviews be filled with question about her or any situation to do with her when I come out to do press for my new album! No devils tricks," he wrote.

Nicki and Meek began dating back in 2015 before their bitter split two years later in 2017.

Back in 2018, Meek admitted to snooping on Nicki's new man by heading over to her profile, before making the discovery that he has been blocked ."I don’t feel nothing ... and I don’t know that man to judge him ... I went to check him out on her page and found out I was blocked," he said at the time.

During a show in Australia in January last year, Nicki threatened to expose Meek while she was performing her hit 'Barbie Dreams,' which contains a reference to her famous ex-boyfriend.

"Meek still be in my DMs, I be having to duck him,” she spat before pausing the track. She then said to the crowd, "I mean, I could tell you secrets but I won’t, 'cause being a bitter b*tch is what I don't." 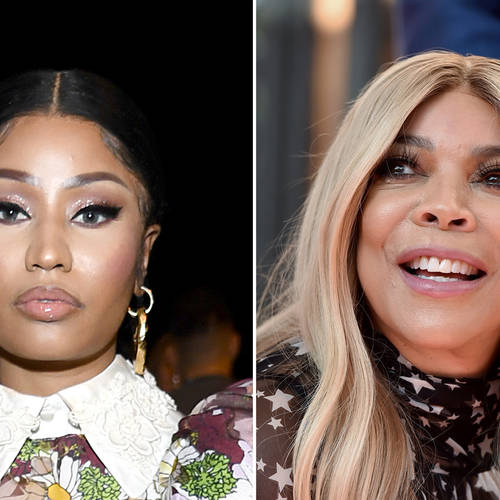