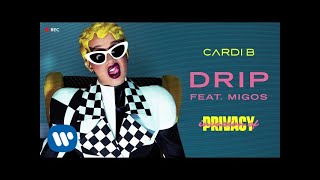 Cardi B is back with more new music.

Offset appears to have addressed his ongoing drama with a woman who claims to have given birth to his child, on Cardi B’s new song 'Drip'.

The Migos rapper, who responded to the accusations last week, appears to have channelled another reply in his verse on the song.

The woman, called Celina Powell, is reportedly seeking $15,000 a month from Offset for a baby she has called Karma.

While Offset has repeatedly denied all allegations and claims she is lying about ever meeting him.

She is reportedly trying to make Offset take a DNA test to prove that he is the baby’s father later in April.

Meanwhile Cardi B delivers fiery lyrics of her own on the song, alongside catchy verses from Migos members Takeoff and Quavo.

‘Drip’ is likely to be taken from Cardi B’s highly-anticipated new album ‘Invasion Of Privacy’, which is set for release on 6th April.