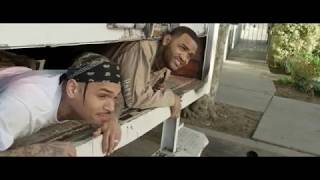 The track features on their upcoming joint project 'Angels & Demons'.

Chris Brown has teamed up with American rapper Joyner Lucas for their new song 'Stranger Things.'

The Netflix-inspired hit, which is accompanied by a party-filled visual, hears Breezy channel his rapping skills as he flexes alongside Lucas.

"If I don't buy her them shoes, I don't like those," he spits over the energetic track, "Do anything that I want to it, think I'm gon' dance on the moon like Michael."

"B*itch, I'm the professor, you a student to me," Lucas raps in a slick, high-energy style, "Designer shades on, like you cooler than me."

The video centres around the duo as they pose as a Pest Control service, hiding the fact that they travel around LA hosting parties in their van.

Watch the video for 'Stranger Things' above.

The track is set to feature on the upcoming collaborative project between Brown and Lucas, 'Angels & Demons', which is set to drop later this year.