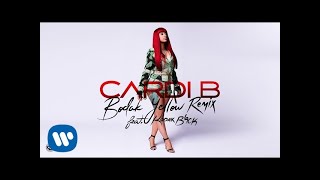 The original song was heavily inspired by Kodak Black’s own hit ‘No Flockin’, so it’s no surprise to see the rapper appear on the remix.

The Florida rapper drops a big verse on the track and flips his original style of rapping for the new song.

“You thought I was coming with my old flow,” he raps, before later offering some ad libs to Cardi’s infectious anthem.

Listen to the Kodak Black remix of Cardi B’s ‘Bodak Yellow’ above.

Meanwhile, the original ‘Bodak Yellow’ is strongly tipped to overtake Taylor Swift’s ‘Look What You Made Me Do’ and top the Billboard 100 Chart this week.

If that happens, Cardi B will be the female rapper since Lauryn Hill to have a No.1 song on the Billboard charts with a solo single.