Rihanna has been saying the album is coming, after fans pressure her for new music. Fans are ecstatic as it's been revealed the star is making music with a British Grime artist...

It would surely be any upcoming British artist' dream to be in the presence of Rihanna, let alone to make music with her. But one lucky Croydon-born artist has been working closely with the "Diamonds" star on her new music.

The Grime artist Rihanna is collaborating with has worked with many British artists such as AJ Tracey, Sneakbo, DaBeatfreakz, Red Rat and 67.

Not only is it a Grime artist Rihanna is collaborating with, it is a female Grime artist ! Fans can't wait to see what comes from two powerful females within the music game.

mind you... ive been working with an American label for the past month writing for YOUR FAVOURITE ARTIST and they treated me v well 💞💞

The Grime superstar Rihanna is collaborating with is the renowned "Station" artist Nadia Rose. Croydon’s very own Nadia Rose has been teasing us with hints about who she may be writing for with a series of tantalising tweets stating:

"mind you... ive been working with an American label for the past month writing for YOUR FAVOURITE ARTIST and they treated me v well". She then added "she's a 'bad gal' like me.. that's all im gonna say".

American artists are increasingly collaborating with British Grime Artistis as there is a spotlight on the UK scene and British Hip-Hop culture right now. We have seen some of the best UK and U.S collaborations, such as; Drake and Giggs, Kehlani and Stormzy, Azelia Banks and Shystie and French Montana with Krept and Konan.

Pop star rapper Drake has collaborated with Dave, Giggs, Jorja Smith, Sampha and has been on stage with BBK and Skepta.

The "Wild Thoughts" singer, is multi-faceted with her hands in a variety of business ventures. Rihanna is making powerful moves within the fashion and beauty industry. The superstar has made revolutionary moves making inclusive and diverse makeup products with her brand "Fenty Beauty". T

he designer also has created a intimate wear line called "Savage Fenty" which features sexy lingeries pieces. It is rumoured that Rihanna is in the midst of making her own luxury brand.

Although Rihanna is celebrated for the powerful moves she's making as a business woman, the Fenty Army is getting impatient and are demanding new music from the Basian superstar.

Rihanna's new album that is set to drop in 2019, is highlight anticipated as her last album release was 'Anti' in 2016.

Now we look forward to a collaboration with her and Nadia Rose. it is unclear how they will collaborate but it is definitely happening. Nadia hints writing for the star, but fans also suspect they are going to make a song together.

> Download Our Free App For All The Latest Rihanna News! 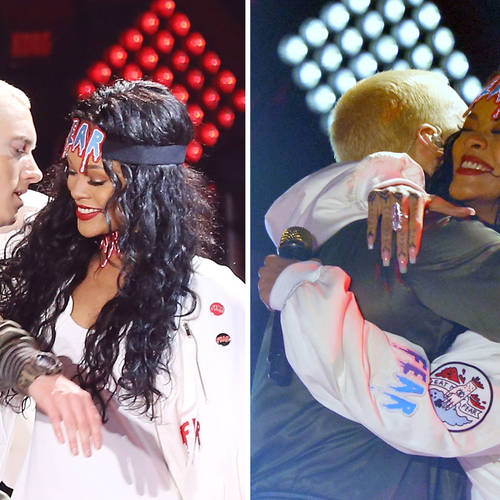