Featuring Lil Wayne, Drake, Nicki Minaj and more, these are the tracks that made the cut and the songs to expect on Young Money's new album.

Young Money have been teasing the release of their second compilation album Young Money: Rise Of An Empire, due for a 11th March release date, for a while but finally the speculation of what tracks have made the cut is over.

Drake, Nicki Minaj, Lil Wayne and the rest of the YMCMB family have revealed the full tracklisting for the label mates latest project.

Plus, Senile, for which the artwork was recently teased, makes an appearance alongside a solo track from Lil Wayne entitled Moment, which is yet to be heard. 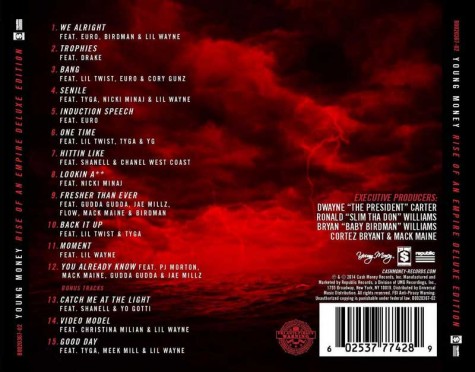 The album is a follow up 2009's We Are Young Money, the album that homed Lil Wayne's Bedrock.

Check out the full tracklisting for Young Money: Rise Of An Empire: