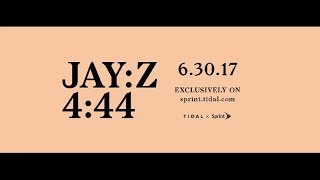 Jay Z is back!

Jay Z has given fans a preview of his new music from his upcoming album ‘4:44’.

The rapper, who recently welcomed the birth of twins with Beyonce, has been working on his 13th album over the past year and is ready to release the project.

The new song called ‘Adnis’, hears Jay Z rapping about his relationship with his father.

Jay Z’s new album ‘4:44’ will be released on 30th June, exclusively to members of TIDAL and US phone network Sprint.

There are rumours that Jay’s new album will be a visual project, similar to Beyonce, after TIDAL recently announced a movie of the same name starring Danny Glover, Lupita Nyong’o and more.

The New York rapper recently sparked rumours about a collaboration with Damian Marley after the pair were reportedly spotted shooting a music video in Jamaica.

“We did some work in the studio recently and he wanted to come to Jamaica to get a tour of the place,” Marley told Billboard.

“Well, I did some work with him for some stuff he’s working on. I’m not really sure of the details of his project in that sense, but we worked on some music together. I’ve been a fan of his music since he came out.”

Meanwhile, Jay Z will headline this year’s V Festival in August, alongside Pink.