Amber Rose On Khloe Kardashian Feud: "I Don't Hate Her" 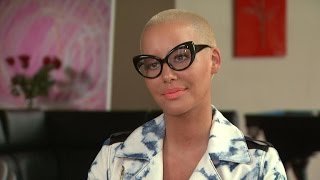 Amber Rose Opens up About Khloe Kardashian Feud: 'I Don't Hate Her'

Amber Rose has spoken out about her recent Twitter feud with Khloé Kardashian, claiming that she "doesn't hate" the reality TV star.

The two women got in a public row after Amber commented on 17-year-old Kylie Kardashian's reported romance with Tyga in an interview.

But Amber has held out an olive branch, claiming that she would "absolutely" like to make things up with the Kardashian clan.

"I don't hate Khloé. I don't hate her," the model said in an interview with Entertainment Tonight.

"I can understand why [the comments about Kylie] came across the wrong way to her. I get it. But that's a phone call she could have had with me. She didn't have to Tweet 11 times and try to humiliate me when the only reason why these girls have careers is because their older sister had a little fun on tape."

She added; "Let's be realistic … I never ever hated on that. I'm all for a woman making something out of nothing."

Amber did admit to be being hurt by Kanye's comment that he had to take "30 showers" after sleeping with her, by said she's "100% cool" with his marriage to Kim Kardashian.