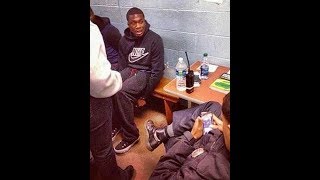 Meek Mill Arrested For Riding his Dirtbike through NYC Streets.

The rapper was charged with reckless endangerment by police in New York City.

Meek Mill has been arrested for reckless endangerment after driving his dirt bike on the streets of New York City.

The rapper took to Instagram Live last night to broadcast footage of himself riding his bike - according to one reporter, Meek was moving "in and out of traffic and popping wheelies in the street."

However, things took a bad turn for Meek when one of the viewers watching the Philly native's live stream turned out to be a NYC cop.

After watching the footage online, the policeman tracked down Meek and arrested him for reckless endangerment and took him into custody.

.@NYPD34Pct cops say he was riding in and out of traffic and popping wheelies in the street. They saw it all on @instagram live.

Footage of Meek’s arrest later surfaced online, where a cop can be heard asking Meek if he was “riding around on a motorcycle yesterday.”

The officer continues, "I got video of you", before one of Meeks friends says "They say it's 'cause he was riding a dirt bike yesterday."

"He was arrested for an open complaint on reckless endangerment," a spokesperson said.

"Apparently he was seen on social media driving recklessly on a dirt bike. Police encountered him today and arrested him. He's already been removed to Central Booking, and he'll be going to court now."

Meek is due to perform on The Tonight Show Starring Jimmy Fallon this week after the recent release of his new album 'Wins & Losses'.