Watch Kendrick Lamar Kill It While Freestyling Over Some Notorious B.I.G Classics 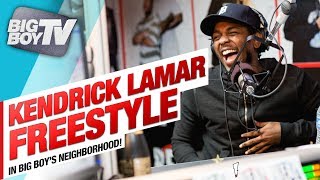 Yesterday was the eighteenth anniversary of the death of The Notorious B.I.G. (9th March). The world of music paid tribute all over social media, with the likes of P. Diddy and Mariah Carey showing their support.

But it was Kendrick Lamar who perhaps made the best tribute, with a killer freestyle over Biggie's 'The What' and other classics by the late rapper.

Kendrick was a guest on Big Boy’s new L.A. radio show on 92.3 FM when he was asked to do the rap, and it's safe to say he nailed it. You can watch the freestyle above.

Kendrick Lamar recently announced his new album will be called '[Untitled]' and will be released on 23rd March.

We paid tribute to Biggie our own way at Capital XTRA by with a mix of the late rapper's greatest hits. You can listen to Capital Xtra's Notorious B.I.G. mix here.