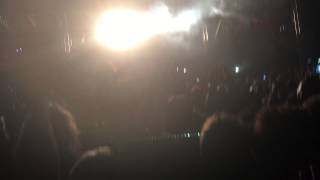 Rihanna performed 'All Of The Lights' and 'FourFiveSeconds'.

Kanye West headlined FYF Fest in LA over the weekend, performing a set that included surprise appearance by Rihanna.

According to Billboard, the singer was watching the show from the crowd when West handed her the microphone during their hit ‘FourFiveSeconds’.

The Bajan popstar sang the track from the pit, before joining Kanye on stage for a performance of his 2010 track ‘All Of The Lights.’

Check out the footage below:

Kanye West was announced as a late addition to the FYF Fest line-up after Frank Ocean pulled out of his performance.

'Ye is currently finishing up his latest album ‘SWISH’ which is rumoured to be dropping later this year.