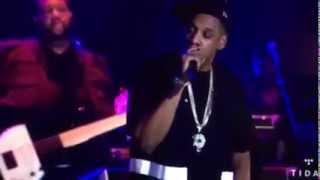 Hov dug deep into his discography to promote his streaming service.

As well as digging deep into his decade-spanning discography for a set that included deeper cuts like 'Dead Presidents', 'Blueprint (Momma Loves Me)' and 'Imaginary Players,' the Roc Nation founder dropped a brand new freestyle.

In the surprise freestyle, Hov takes shots at competitors YouTube and Spotify and even claims that Apple's Jimmy Iovine and YouTube offered him deals.

"I don’t take no checks. I take my respect. Pharrell even told me go with the safest bet. Jimmy Iovine offered a safety net. Google dangled around a crazy check, I feel like YouTube is the biggest culprit," he rapped.

"You know I came into this game independent, right? Tidal, my own lane, same difference. Oh n***as is skeptical as their own s**t. You bought nine iPhones, and Steve Jobs is rich. Phil Knight worth trillions you still bought those kicks. Spotify is 9 million they ain’t say s**t."

He told the audience, made up of Tidal subscribers: "I've been wanting to do this concert for like seven to 10 years. [But] it's a lot of lyrics to learn, I'm just telling y'all this is really hard work. I know you think that I know these sh*ts but it’s like a history lesson."