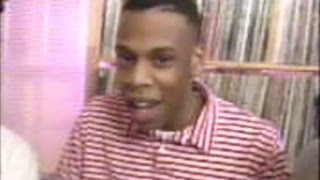 JAY Z's 1st Rap EVER on TV They Didn't Even Say His Name!

This is a serious throwback.

An old-school video of Jay Z during his first TV appearance 25 years ago has surfaced online.

The video shows Hov making an appearance on BET's 'Rap City' back in 1990, six years before the release of his debut studio album 'Reasonable Doubt'.

He's joined by Big Daddy for an interview and is asked to drop a short freestyle, although (as the YouTube user that uploaded the video points out), he doesn't even get a proper introduction.

A vintage video of Jay Z being interviewed about his love life, recorded eight years later in 1998, surfaced online at the end of last year. In it Beyoncé's now husband is seen describing his perfect woman.