Watch This Guy Launch Into an Epic Dr. Dre Piano Medley In A Bar 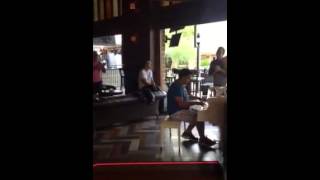 With ‘Straight Outta Compton’ currently the number one movie in the US, a man has performed an impromptu jam of Dr. Dre classics in an Arizona bar.

The unidentified pianist began playing the melody from Dr. Dre and Snoop Dogg classic ‘Still Dre’ while a small crowd formed around him, before transitioning into Dr. Dre’s 1999 song ‘What’s The Difference’.

Ice Cube and the cast from 'Straight Outta Compton' paid Capital XTRA a visit on the weekend, chatting to Westwood about what fans can expect from the film.

Watch the amazing footage above.