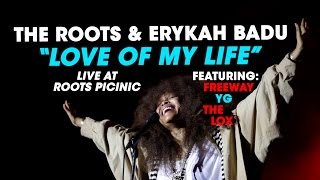 The Roots & Erykah Badu "Love of My Life" Picnic Opus

Hear them cover songs from Nas, Kanye West and YG.

Erykah Badu and The Roots covered a number of hip hop classics at gig in Philadelphia.

The two paired up for a 20-minute medley that featured hits from hip hop stars like Afrika Bambaataa and Kanye West. To give them a hand, they enlisted rappers YG, the LOX and Freeway, who made brief appearances on-stage.

“Initially the idea just started with The Roots and Erykah wanting to mash our songs together,” Questlove explained to Billboard, “but as the wheels started turning I decided maybe we should turn towards more of a full on tribute to hip-hop, and then the wheels really started turning when the budget allowed me to fly out a few luminaries to perform with us.

"So, for some reason, a 5-minute song turned into a 20-minute migraine for my manager…but I thoroughly enjoyed it.”

Watch the brilliant performance above.