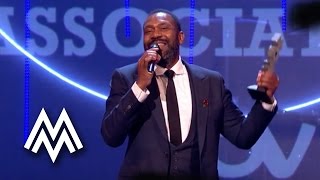 Lenny Henry just gave the most epic MOBO acceptance speech of all time.

Tonight (4th November 2015) Lenny Henry made MOBO Awards history by giving the most epic speech ever as he accepted the first ever 'Paving The Way' award.

The TV star began by saying; "I could only have got here from standing on the shoulder of giants. I want to name-check some of those giants now."

Lenny went on to name-check an endless string of people and media outlets from all industries and walks of life, including (but not limited to) Bob Marley, Michael Jackson and "that bloke from the Halifax advert."

"These are the giants whose shoulders I stand on and I hope that next year someone will be standing on my shoulders," he said, adding "so long as it's not Cee-Lo bloody Green."

As soon as the speech ended, Twitter went crazy for it.

I love lenny henry, his speech was everything! #MOBOAWARDS

Oi @LennyHenry just shut it down with the hottest freestyle of 2015! #MOBOAWARDS

How did Lenny Henry remember all them names then by the way? I forget about people in the group chat