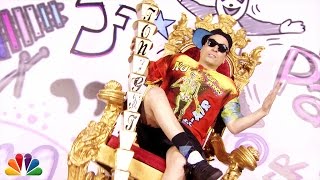 The US TV host has made an amazing parody video with help from some special guests.

Jimmy Fallon has hilariously recreated the entire opening sequence of hit TV show The Fresh Prince Of Bel-Air in a video that is impressively similar to the original.

Filmed to mark 'The Tonight Show' moving from New York to Los Angeles, Fallon is seen leaving the 6B Rocefella studio in New York and heading to Universal Studios in a yellow cab, remembering to shout "Smell ya later!" before jumping out.

Two special cameos from the show's original cast, Alfonso Ribeiro aka Carlton and DJ Jazzy Jeff, along with the Fresh Prince-like outfits and a graffiti scene that will take you back, only add to what's a brilliant parody.

Relive the iconic 'The Fresh Prince Of Bel-Air' opening sequence below:

Earlier in the week Jimmy Fallon was joined by Will Ferrell and Kevin Hart as the three went up against each other for the most competitive lip sync battle of all time. Will Ferrell took on Beyoncé's 'Drunk In Love,' a rendition that you will never be able to un-see.