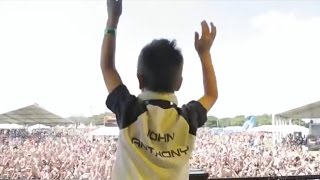 There's a new DJ on the scene that's taking the dance music world by a storm, but he's not what you'd expect. The up and coming star is just a 9-year-old boy (and you thought Martin Garrix was young).

Child prodigy John Anthony has reportedly been performing for three years. He cut this teeth as a DJ in the nightclub his dad also plays at, getting lessons after school from the residents.

Despite his growing fame, Anthony won't be playing at all-night sets for a while – his bedtime is still strictly 9pm.

Watch Anthony work a festival crowd in the video above.