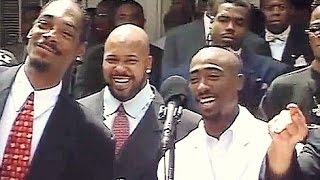 A video has been unearthed showing Tupac Shakur, Snoop Dogg, Suge Knight, and a number of Death Row Records artists speaking on the importance of voting.

The clip, recorded at the Brotherhood Crusade Rally in 1996, sees Death Row Records boss Suge Knight, introduce both Tupac and Snoop as spokespersons for the label.

“One thing I’d like to say, if it weren’t for the community, it would be no Death Row Records,” said Suge Knight.

“And more important than all that, if it weren’t for Snoop, Daz, Hammer, Tupac… it would be no me.”

Tupac, who was murdered less than one month after this footage was recorded, spoke on how the fans who purchase albums from Death Row artists should also represent voters.

“We just want y’all to know that at Death Row we appreciate everything y’all doing for us,” said Tupac.

“My record sales, we got six million. Snoop got four million. Dogg Pound got three million. And we keep going.