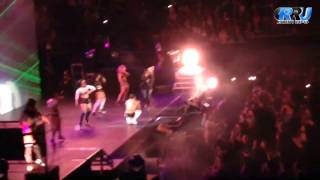 Watch what happened when Nicki made a surprise appearance on stage in Los Angeles.

Nicki Minaj made a surprise appearance during Chris Brown and Trey Songz' 'Between The Sheets' tour in Los Angeles.

The rapper appeared on stage during Trey's performance of 'Touchin' Lovin' to spit her verse - you can watch the video above. (Warning: the video contains strong language that some people may find offensive.)

Recently, Trey Songz announced a one-off gig in London that will coincide with his support slot on Nicki Minaj's UK tour.