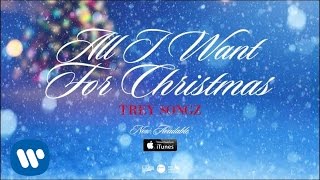 Trey Songz - All I Want For Christmas [Official Audio]

This will get you feeing festive.

If you weren't feeling festive yet, Trey Songz is about to change that. The 'Smart Phones' singer has unveiled a cover of the Mariah Carey 1994 Christmas classic 'All I Want For Christmas.'

The track hears Trey change things up by putting his smooth r&b vocals on the song, keeping things upbeat.

2015 is set to be one busy year for Trigga. Not only has he announced a collaborative North American tour with Chris Brown, titled 'Between The Sheets Tour,' but yesterday Nicki Minaj unveiled that she will be bringing a new tour, 'The Pinkprint Tour' to Europe in 2015 with Trey Songz as her special guest.

The tour will see the two head to London's O2 arena before stopping in Dublin, Birmingham, Manchester, Leeds and more.