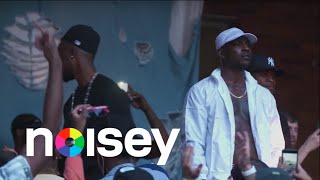 The song is taken from Skepta's recent mixtape with Tim Westwood.

Skepta has revealed a new music video for ‘Top Boy’, a song taken from his recent mixtape with Tim Westwood.

The clip, produced by Noisey, shows footage taken from the MC’s recent tour of North America and Canada, which ended at Drake’s OVO Fest in Toronto.

Noisey have also revealed that they have produced a full-length documentary about Skepta’s US tour, which will be released soon.

Watch the video above and listen to the full track below:

Meanwhile, Skepta recently revealed that he plans to to take a break from his hectic touring schedule.

The Grime MC has been relentlessly touring for over two years and will take a well earned rest before he starts his tour of Australia in December.

OMG!! My last show today for a long time. Wow.

Man has been going hard for 2 years + no breaks, waking up in the tour bus backstage at shows and mans on stage in 10 minutes.

Going super hard tonight then mans detoxing for a while I can't lie. No intoxication til the Australia tour starts in December.