These Teens Reacting To Nicki Minaj's 'Anaconda' Is Absolutely Hilarious 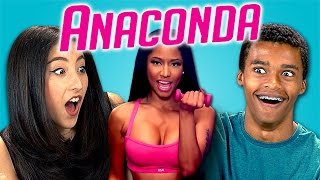 Their faces are quite the picture.

A video showing teens watching Nicki Minaj's 'Anaconda' music video for the first time has been released and its absolutely hilarious.

While some - mainly the boys - can't take their eyes off of it, others cringe, some sing along and some of the young adults have strong opinions about what the message in 'Anaconda' means in society today.

Watch how teens reacted to 'Anaconda' above.