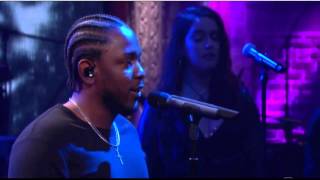 Kendrick performed an amazing mash-up of 'To Pimp A Butterfly' songs.

Kendrick Lamar delivered a jaw-dropping performance of tracks from his latest album ‘To Pimp A Butterfly’ while on ‘The Late Show’ with Stephen Colbert.

Rocking freshly braided hair, the rapper took on an electrifying medley of songs from the project including ‘Wesley’s Theory’, ‘King Kunta’ and ‘U’.

Lamar was the final guest performer for Stephen Colbert’s previous show ‘Colbert Report’ and was asked to be the first on his new late night talk show.

Watch Kendrick Lamar at his best above.