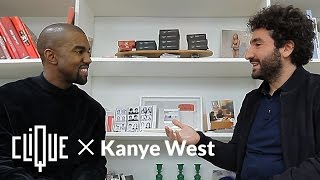 Yeezy refers to Drake as a sparring partner.

Speaking with Clique, Kanye West has announced that he sees Drake as some kind of sparring partner and that Drizzy inspired him to get back in the studio.

“I look at Drake as an amazing sparring partner,” Yeezy told the French publication. “Someone who’s like, ‘Come on, man, get back up!’ Bow! ‘Get back up! What’s up, bro? What you doing?’”

“I was sitting there getting fat. Sitting back, just knocked everybody out. And then this guy hits the gym, he’s just running around like, bow, 14 hits, same as Paul McCartney. I’m like, Whoa. OK. Let me go to the studio, then. Let’s see what’s happening. Let me get these lyrics up. Let me see what’s happening. So, that’s where we at right now, that’s where you getting these records from.”

Yeezy goes on to tap about how the competition is healthy and necessary. Although we're not sure who would win if the two actually went head to head n the ring.

You can watch the full interview above.

Knaye West's seventh album, 'So Help Me God', is expected later this year.