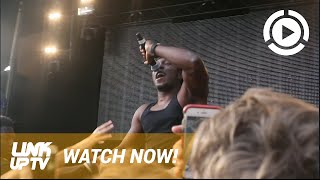 Dizzee Rascal made a surprise appearance during Stormzy's set at Wireless festival in London.

The 'Boy In The Corner' MC dropped in on the South London prodigy unannounced, performing his classic 'I Luv U'.

@stormzyofficial and DIZZEE RASCAL at Wireless

Dizzee got right into it, even jumping straight into the audience at one point.

"Dizzee f****ing Rascal, who would have thought," Stormzy told the audience, almost in as much disbelief as the audience at witnessing the grime originator.

It's not the first surprise of Wireless Festival 2015, last week Rita Ora was joined by Krept & Konan at Wireless' 10th Birthday party and last night Skepta joined Drake during his headline set to 'Shutdown' Finsbury Park.