Spotify have announced the top performing artists, songs and albums of 2017 so far.

Ed Sheeran has been revealed as the most globally-streamed artist, with his album '÷' being streamed 3.1 billion times, while his single ‘Shape Of You’ was the most streamed song in Spotify history with 1.4 billion plays.

"There is no doubt that 2017 was The Year of Ed Sheeran, and we are thrilled that so many millions of music fans have discovered, listened to, and shared his music on Spotify. Congratulations to Ed on an amazing achievement."

The Weeknd, Kendrick Lamar and The Chainsmokers rounded out the top 5.

Check out Spotify’s end-of-year breakdown below: 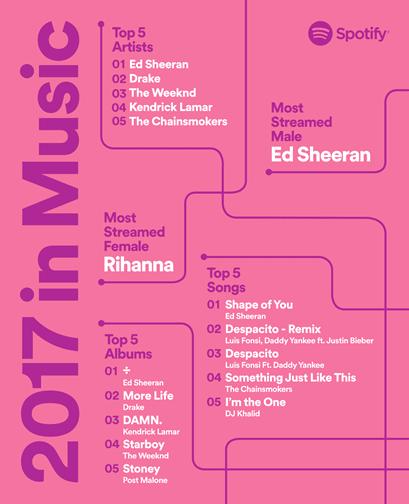 Are City Girls' JT and Lil Uzi Vert dating? How long have they been together?

Biggie Smalls family: From his kids to his parents & widow Faith Evans

How did Biggie Smalls die & how old was he when he died?

Biggie Smalls net worth: The impressive fortune earned by The Notorious B.I.G