The 'Feed Em To The Lions' rapper is facing shocking allegations.

Boy Better Know rapper Solo 45 has been charged with 29 counts of rape.

The Grime MC, real name Andy Anoyke, had earlier been charged with 2 counts of rape, one count of false imprisonment and one of causing actual bodily harm.

However the ‘Feed Em To The Lions’ rapper has now been charged with a further 27 counts of rape after three more people have come forward and made allegations.

Anoyke had pleaded not guilty to the earlier charges at Bristol Crown Court, but is now due to stand trial on 16th April 2018.

Stormzy was caught up in a feud with the Daily Mail after they published a story with his name and picture in the headline.

“Boy Better Know star who worked with Stormzy is accused of 29 rapes,” wrote the newspaper, alongside a picture of Stormzy and Solo 45. 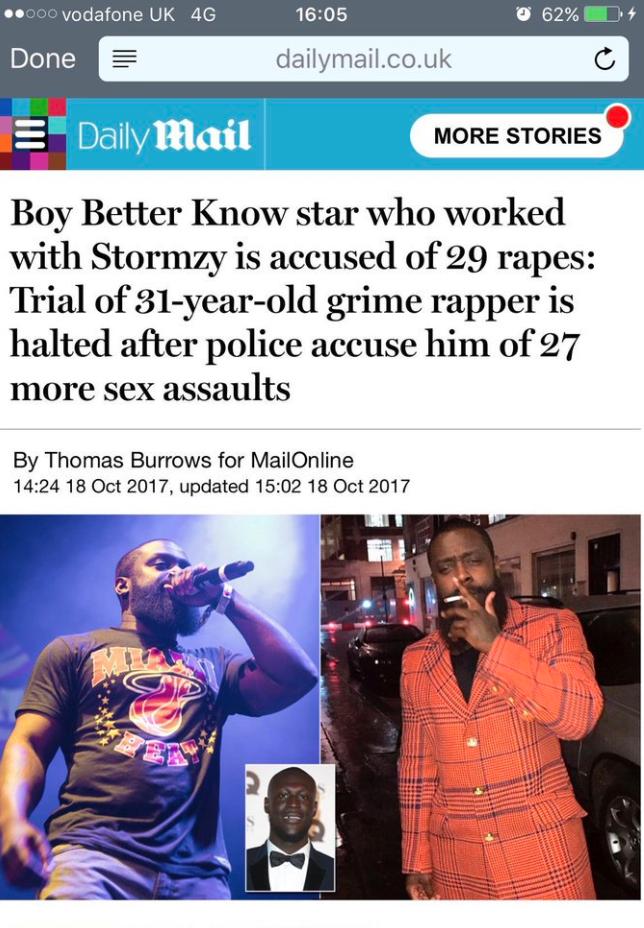 After seeing the headline, Stormzy fired back angrily on Twitter.

You lot are all pricks I don't care

“You lot are pricks I don’t care,” he began. “Everyone at the Daily Mail can suck their mum’s as well from the CEO to the receptionist.”

Meanwhile, Boy Better Know’s JME has since responded to the shocking allegations about Solo 45.

I didn’t want to speak until the case was over, and verdict reached.
As I have no idea what the intricacies are, who the victims are etc…

Everyone saying “people are being silent” it’s because they are waiting for a verdict before passing judgement. The charges are crazy.

But you have to admit the charges are totally shocking.

Some people will speak up immediately as news hits, some will wait for a verdict.
Thats why I think “the scene” has been quiet on the issue.

But yeh, that’s some fucked up shit fam. Full stop.