Fans are not impressed.

A costume company is now selling a Kim Kardashian Halloween outfit inspired by her recent gunpoint robbery in Paris.

US fancy dress makers Costumeish are cashing in on all the controversy surrounding the reality star’s dramatic ordeal, just in time for Halloween.

The ‘Parisian Heist Robbery Victim Costume’ is available for $69.99 (£56) and comes complete with a white robe, a black wig, a “$4m dollar ring”, large sunglasses, a fake gag and 2’ of rope. 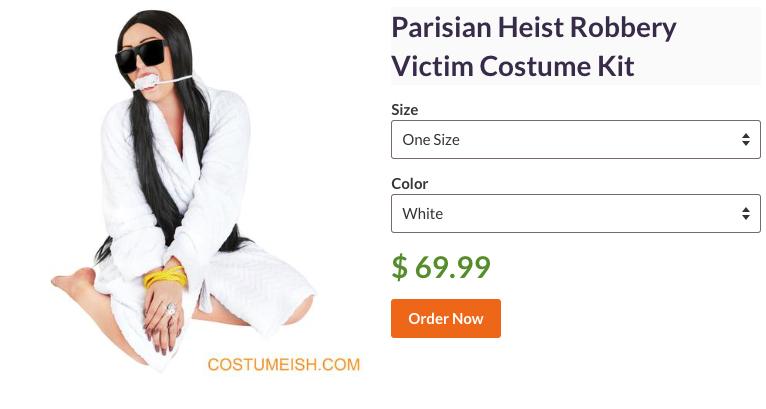 The description for the costume reads: “She has devoted her life to promoting American decadence, youth, and hedonism but all that flashy living caught up with her one night in Paris when armed men bound her, stole her jewelry and her peace of mind.”

Fans have since taken to Twitter to express their disgust at the outfit:

Who decided to make a costume out of @KimKardashian's robbery? I don't even like her and know that's still not something to joke about

Someone made a 'Kim Kardashian robbery victim' costume for Halloween, I'd like to die and leave this planet for good, now.

okay this is disgusting? a women being bound and threatened wITH HER LIFE IS NOT A COSTUME KIM KARDASHIAN IS IN FACT A HUMAN WITH FEELINGS!! pic.twitter.com/5gXenncoNV

So horrible that someone would actually make a 'Kim Kardashian Robbery' Halloween costume!

That Kim Kardashian Halloween costume is not right at all

What is the name of Khloé and Tristan's baby boy?