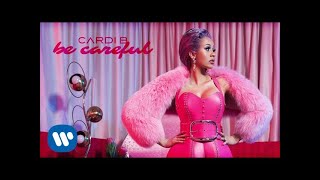 Cardi B - Be Careful [Official Audio]

Cardi B appears to have addressed her fiancée Offset’s alleged cheating in her new single ‘Be Careful’.

The ‘Bodak Yellow’ rapper, who is strongly rumoured to be pregnant with Offset’s child, has some strong words for her husband-to-be.

“I wanna get married, like the Curries, Steph and Ayesha sh*t,” she raps.

“But we more like Belly, Tommy and Keisha shit / Gave you TLC, you wanna creep and sh*t / Poured out my whole heart to a piece of sh*t.”

Over the powerful Vinylz, Boi-1da, and Frank Dukes production, she has some more strong words for Offset.

Offset is currently facing a DNA test from a woman called Celina Powell, who claims she just gave birth to his fourth child.

He has also faced a number of alleged cheating scandals in the past, including an alleged leaked sex tape.

Meanwhile, Cardi B is currently finishing her highly-anticipated debut album ‘Invasion Of Privacy’, which will be released on 6th April.

Listen to 'Be Careful' above.