The Hip-Hop A-list pulled out all the stops for their Thanksgiving celebrations this year.

As many chose to celebrate the holiday with their families, Beyonce and Big Sean put their best feet forward to help the less fortunate this holiday season.

The 'Lemonade' singer donated a vast number of 'Blessing Boxes' filled with food for families in Houston, while Sean Don hosted his annual Turkey Giveaway away in his hometown of Detroit.

Meanwhile, Diddy hosted the ultimate Thanksgiving dinner by setting up a mammoth dining table in his back garden for his friends and family.

The star-studded event was also attended by Snoop Dogg and DJ Khaled, with Diddy - who recently opted to change his moniker - and the 'Drop It Like It's Hot' rapper providing their own speeches of thanks.

As expected, the Kardashian-Jenner clan congregated together in their typical extravagant style.

The dinner was held at Kylie's mansion, which was decked out head-to-toe in autumnal decorations and twinkling tea lights.

Interestingly, the 20-year-old social media star didn't feature in any of the photos taken at the bash, fuelling rumours that she is currently pregnant.

@KylieJenner Kylie's #Thanksgiving is looks like flawless with @KrisJenner pic.twitter.com/tOFDKtZufc 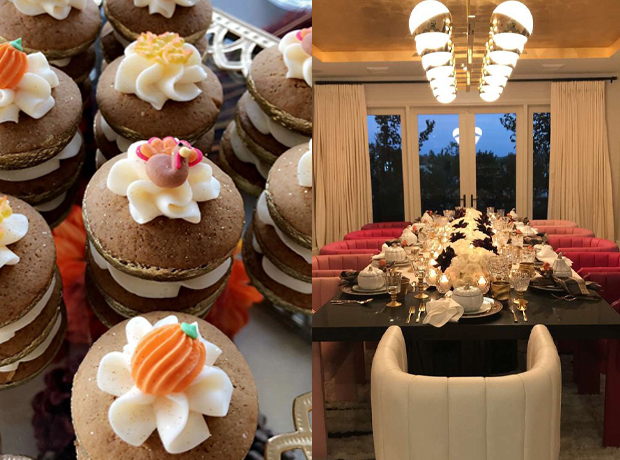 Khloe Kardashian appeared to celebrate the holiday separately from her family, instead choosing to spend it with boyfriend Tristan Thompson in Cleveland

The reality TV star, who is also rumoured to be expecting her first child, told her Snapchat followers she was "exhausted" after preparing food for the event.

Khloe's 'bump' was barely visible beneath her over-sized festive pyjamas as fans continue to speculate the sister's alleged pregnancies.

Other stars seen to be spreading the festive love include T.I. and his family, the Obamas and Mariah Carey.

The 'All I Want For Christmas Is You' songstress told fans she was "still under the weather" after posting an image of her appearing to cook dinner for the occasion.

From the Obama family to yours, we wish you a Happy Thanksgiving full of joy and gratitude. pic.twitter.com/xAvSQwjQkz