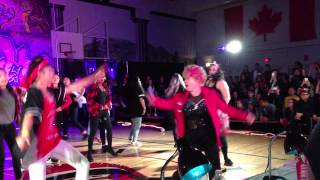 Shirley Clements bowed out in style.

When high school dance teacher Shirley Clements decided to retire, she made her exit in the one way she knows best.

The 60-year-old bowed out with a dance routine choreographed for Bruno Mars's 'Uptown Funk'. In a video, filmed by a pupil in the audience, Clements performs some killer moves, wearing Mars's trademark bandana, together with her students.

At one point she even breakdances, pulling off a headspin much to the crowd's audible delight.

With a display like that her pupils won't be forgetting her anytime soon. Watch the insane video above.