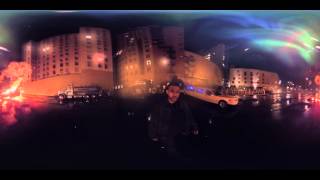 The Weeknd has created a 360 degree experience.

The Weeknd has created a virtual reality video for Eminem’s remix of his hit single ‘The Hills’.

Directed by Nabil, the disorientating clip was shot on a GoPro on the set of the singer’s recent Apple Music advert.

However, the clip allows fans to experience The Weeknd’s surroundings in a 360 degree setting, as he walks behind a nightclub and past a limo, while a nearby car explodes.

To fully experience the video, it is recommended to use Google Chrome or the YouTube app on mobile.

Meanwhile, in addition to Eminem’s remix of the track, Nicki Minaj also provided her own take, adding a very seductive verse to her version.

The Weeknd will begin his ‘The Madness Fall Tour’ with Travis Scott, Banks, and Halsey next month.