Stormzy Invites His Fans To Powerful ‘Blinded By Your Grace Pt. 2’ Video 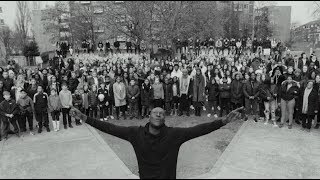 Stormzy invited some of his biggest fans to feature in the powerful visuals for his latest single ‘Blinded By Your Grace Pt. 2’.

The black-and-white music video, which was filmed on a London council estate, shows families of every creed and colour living in a tower block.

His fans provide backing vocals in parts, before appearing to take a moment of silence for those that died in the Grenfell tower disaster earlier this year.

These were my 2 security guard’s for the Blinded By Your Grace Pt.2 video, OUT TOMORROW!!!

Meanwhile, Stormzy recently picked up three awards at the MOBOs in Leeds.

The rapper won Best Male, Best Grime Act and Best Album, before appearing on stage to perform with Krept & Konan.

Watch the official video for Stormzy's 'Blinded By Your Grace Pt. 2' above.