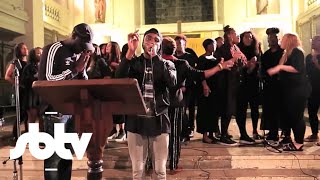 Stormzy was a special guest on Pepstar's 'Beats & Bars' series on SBTV.

UK rapper and producer Pepstar performed his latest track in a church and invited special guest Stormzy, who delivered a strong verse.

“I was sitting in the studio one day and had an idea of a grand church with a nice organ and a massive choir,” Pepstar told SBTV.

“The special guest just took it to the next level,” he added.

Stormzy, who recently performed to a packed Reading Festival crowd, dropped his bars in the middle of a church, backed by a soulful gospel choir.

This performance by the Grime MC follows his 'Nigo Duppy' freestyle, which was a celebration of his involvement in a new deal between Adidas and designer Nigo.

Meanwhile, the Stormzy is set to begin his sold-out UK tour next month, taking in venues including London’s KOKO on 29th October.