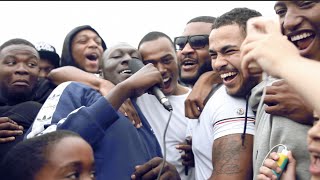 Stormzy has released an amazing video for his new freestyle ‘Wicked Skengman 4’.

Stormzy's new track is the latest in his ‘Wicked Skengman’ freestyle series and sees the Grime MC take on JME’s legendary ‘Serious’ instrumental.

“If you’ve got a BET bring it out/ Oh you don’t?/ Shut your mouth,” he raps over the bouncy production.

He also took time to have a light-hearted rap battle with a 9-year-old boy who attempted to diss him at the video shoot.

“You’re like 9/You’re not even 10 yet/You can’t even bench-press,” he said jokingly.

Stormzy is currently working on his debut album and preparing for his sold out UK tour next month, which will take in venues including London’s KOKO on 29th October.

Meanwhile, Stormzy recently delivered an incredible church performance alongside a choir, as part of his guest appearance on Pepstar’s ‘Beats & Bars’ web series on SBTV.