The name 'ShETHER' takes inspiration from Nas's legendary 'Ether' diss track aimed at Jay Z, highlighting the comparisons Nicki Minaj has previously made between herself and Hov.

In response, Nicki Minaj posted a video to her Instagram account, in which Beyonce can be heard hailing the 'Anaconda' star as 'the rap queen'.

Nicki also took to Twitter to trade words with her 'Bottles Up' collaborator Trey Songz after his name was dropped in one particularly slanderous 'ShETHER' lyric.

"Mentioning guns, you P***y Galore, James Bond / Only time you touch a trigga is when you f**ked Trey Songz," spat Remy Ma.

Nicki argued that Trey failed to do his part in dismissing the claims, leading him to defend himself and promoting Minaj to delete her tweet. 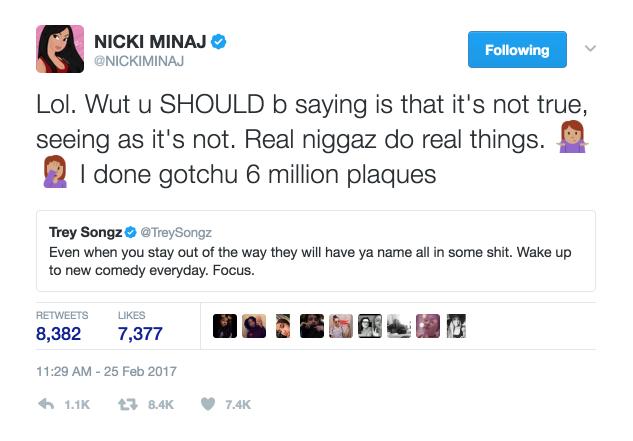 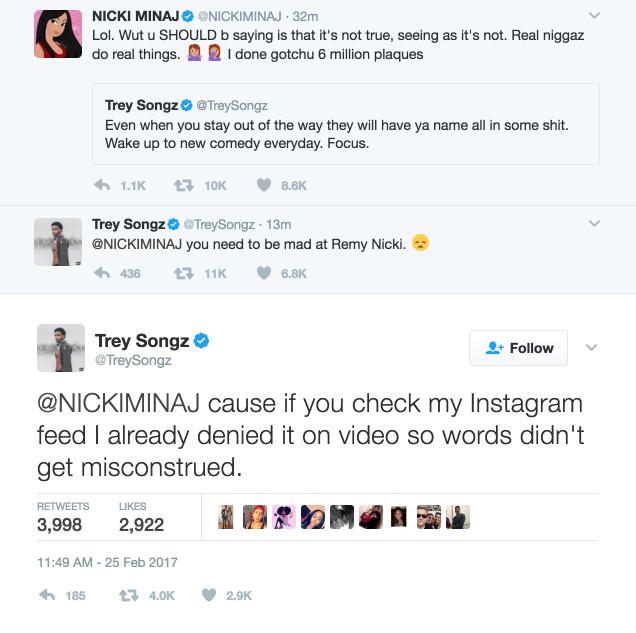 Naturally, the rest of Twitter erupted soon after the song was initially released.

Many users were quick to defend Minaj and her self-proclaimed 'Rap Queen' title...

If lil Kim couldn't end @NICKIMINAJ what y'all think inmate 74690 can?

Tell me how Nicki Minaj gonna end Remy Ma's none existing career??? How is she gonna kill a dead person??

Beyoncé: stay out of it blue aunty @NICKIMINAJ got it.

Blue: nah son, if @RealRemyMa say ONE more thing, I'm getting in the studio pic.twitter.com/qgJ2qSCt9z

...whilst hoards of tweets rolled in contrast, arguing that Remy's diss had 'ended' Nicki's career.

When young ass, uneducated, misinformed Nicki Minaj fans say that Remy Ma career is about to be over before it started pic.twitter.com/GfLiOI8fxE

Just want to say I've been waiting for someone to come through & put Nicki Minaj in her place.
Remy Ma go head booo.

Nicki Minaj waiting on her Ghostwriter to send her a verse after hearing Remy Ma's diss track pic.twitter.com/r789x2IzUu

This is going to get messy...