The 'Hey Mama' rapper responded to a question on Twitter regarding the track.

Nicki Minaj let slip that she has a collaboration with Jay Z dropping soon.

The 'Hey Mama' rapper responded to a question on Twitter about the rumoured track, telling fans it was coming "in 3 more days". The tweet was deleted soon after. 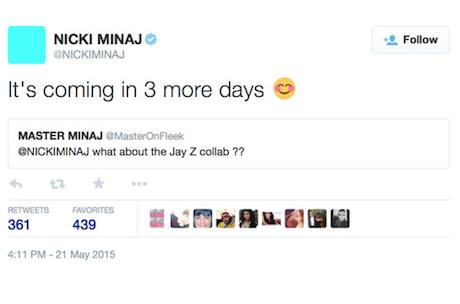 Last month, artwork for a track called 'F*CKUPITCHIN' featuring both artists leaked, fuelling speculation that the two have been working together.

Jay Z appeared on Kanye West's 'Monster' in 2012, on which he was outclassed by what is often ranked as one of Minaj greatest performances.

Nicki recently dropped an exclusive music video for 'Feeling Myself', which features Beyoncé, on Jay Z's Tidal streaming service. She is one of many stars that holds a stake in the company.