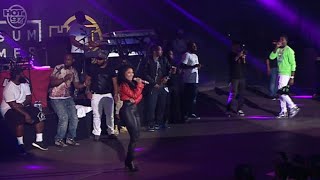 But one of the biggest guests of the night came in the form of Nicki Minaj, who joined Meek Mill on stage for a surprise performance. The most notable part of it all was when, just as Nicki left the stage, the two exchanged 'I Love You's.'

Until that point, fans had been sent confusing messages from the pair about their relationship. With Nicki Minaj strongly suggesting the two were engaged earlier in the year, only for Meek to say otherwise in a recent interview.

The confusion continued last week when Nicki shared a cryptic Instagram message hinting that the pair of them had split.

If you were left in doubt about where the couple stood with one another, rest assured that after two performances together this weekend, the first being at 'X Games,' and now after saying the three big words, they're definitely together.

Watch the moment Nicki and Meek exchange sweet words above (towards the end of the stream).