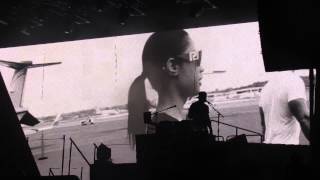 Nicki and Meek just shut down those break up rumours.

Wearing a leather black and white racer combo outfit, the 'Anaconda' rapper shut Texas down with performances of 'Truffle Butter' and Beyoncé-assisted song 'Feeling Myself.'

But the big surprise came when Nicki Minaj welcomed her other half Meek Mill to the stage to perform 'Ima Boss.'

Rumours around Nicki Minaj and Meek Mill have been flying for the last few months. First it appeared the two were engaged, with Nicki constantly flaunting a huge ring on social media. But this week Nicki had us all believing the two had broken up after sharing some cryptic Instagram posts.

Last week Meek confirmed in an interview with Fader that two are are very much together, but aren't ready for marriage yet.