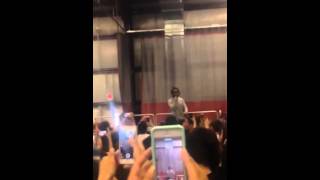 This is one supply teacher they won't forget.

Kendrick Lamar paid a surprise visit to a high school that put his album 'To Pimp a Butterfly' on their curriculum.

A blog post Mooney wrote detailing his experiences of using 'To Pimp a Butterfly' in his lessons went viral eventually catching the attention of Kendrick. "I was intrigued that somebody other than myself can articulate and break down the concepts of To Pimp a Butterfly almost better than I can," Lamar explained during his visit, referring to Mooney's post. "That let me know he's a true lover of music."

It prompted the Grammy Award-winner to stop in for a whole day at the high school during which he listened to student's poetry recitals, freestyled with them and performed his latest single 'Alright' during an assembly.

“I didn’t think I made it for a 16-year-old. So when a 16-year-old is intrigued by it, it lets me know how so far in advance as a society we actually are," Kendrick told NBC in an interview, "And that inspired me on a whole ‘nother level."

when @kendricklamar performs at your school's gym Mr. Mooney is literally the man #HipHopEd #KendrickAtSchool

“A lot of times we’re put in these positions where we don’t know we’re role models," he continued, "And just off the simple fact -- whether we want to be a role model or not –- just the simple fact that we come from these Urban communities, these harsh worlds and we’re on TV and kids are looking at us, we’re already influence.”

Watch Kendrick Lamar perform for the students above.

(Warning: This footage contains strong language that some people may find offensive.)