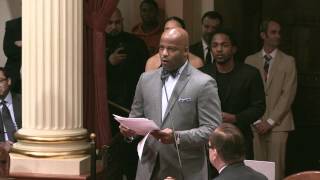 Watch the 'To Pimp A Butterfly' rapper's full speech.

Kanye West wasn't the only rapper honoured with an award this week. While 'Ye was in Chicago, Kendrick Lamar was on the other side of the country receiving the California State Senate's Generational Icon Award.

Presented to him by Compton-born Senator Isadore Hall III, K. Dot was praised for his contributions to his home-state of California since his rise to fame.

"In less than 10 years as a professional artist, Mr. Lamar has gone from a local Compton young boy to become a multi-platinum, Billboard chart-topping, two-time Grammy Award-winning musician, an incredible achievement for anyone 27 years old," said Hall. “But Mr. Lamar has not let his recent fame get the best of him. … Mr. Lamar is a familiar face in the neighbourhood, giving back to his community that raised him."

The 'To Pimp A Butterfly' rapper made his own speech, in which he referred to the award as an "honour."

"Being from the city of Compton, and knowing the parks that I played at, and the neighborhoods, I always thought how great the opportunity would be to give back to my community off what I do in music," Kendrick said.

Watch the full speech above.