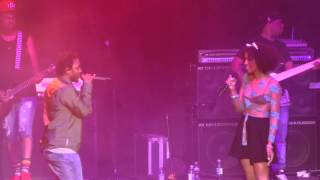 Kendrick Lamar rapped along with a superfan on-stage during his performance at Maryland's Sweetlife festival.

K.Dot invited audience members to join him for the ultimate test of their fandom: seeing how many lines they could rap of 'M.A.A.d City' from his debut album.

One woman outperformed all others, impressively rapping almost all of the track much to the crowd's audible delight. But Kendrick's respect was the ultimate compliment with the Compton rapper telling the audience: "She killed that s***".

Watch the video of Ayanna and Kendrick rapping together above.