The 10 Most Important Quotes From Kanye West's GQ Interview

Kanye speaks about Jay Z and Beyoncé missing the wedding, how Drake is winning rap and when new music will be on the way.

1. On Jay Z and Beyoncé skipping the wedding:

"All that, I wouldn't even speak on. It doesn't even matter to me whatsoever, who would show up. Because the most important person to show up there, to me, was Kim. And that's all that matters to me. I had to fight for that for seven years."

4. What he said in his wedding speech.

"What I talked about in it was the idea of celebrity, and celebrities being treated like blacks were in the '60s, having no rights, and the fact that people can slander your name. I said that in the toast. And I had to say this in a position where I, from the art world, am marrying Kim. And how we're going to fight to raise the respect level for celebrities so that my daughter can live a more normal life. She didn't choose to be a celebrity. But she is. So I'm going to fight to make sure she has a better life." 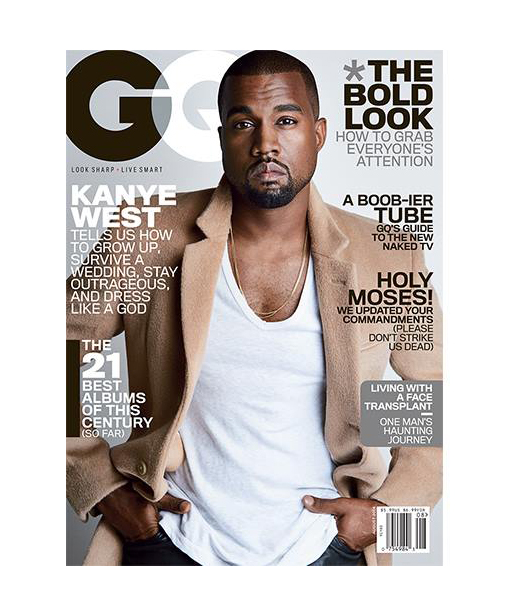 5. A year later, how does Kanye feel about 'Yeezus?'

"I think 'Yeezus' is the beginning of a completely new era of music. It was all new rules. It just broke every rule possible."

6. Kanye wishes there was more nudity in the 'Bound 2' video

"I would have just liked to have had more nudity in it. That's the only thing. I just want to do crazy, colorful shit like that that has more nudity."

7. 'New Slaves' has the best rap verse of all time

"That's what I like about Jay. He has longevity. He's still at the top of relevancy from the way he moves, the way he interacts with people, his ability to brush things off of his shoulder and just win at life. He's the poster child of winning. And I think I was the poster child of, like, fighting and winning. But you always saw the fight. And with Jay, you always saw the win."

9. When can we expect new music from Kanye?

"I don't know, man. I hope I can get one of these songs out in the next couple of weeks, just to have something up and running. But I think most likely September. I go back and forth. Like, should it be September or should it be October? Should it be November? When Beyoncé was working on her last album, she took a while. I was thinking it could somehow come out in June, like Yeezus, and just kill it for the summer. But then I'm like, I have to work on Adidas and be with my child."

"History's gonna be harder to make than I thought."