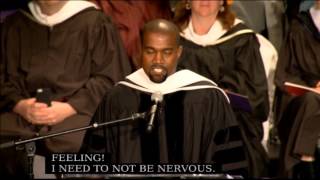 Kanye West was made a doctor by the School of Art Institute of Chicago.

The 'College Dropout' rapper yesterday (11th May) visited the School of Art Institute in his hometown of Chicago, where he was honoured with a doctorate degree.

Yeezy, who admitted he was feeling "nervous," took to the podium to make a short speech, which he began by saying;  "I am a pop artist, so my medium is public opinion, and the world is my canvas."

"When I was giving a lecture at Oxford, I brought up this school because when I went on that mission to create in other spaces, apparel, film, performance, it would have been easier if I could have said that I had a degree at the Art Institute of Chicago," 'Ye told the audience.

Kim Kardashian posted a message to her husband on Instagram letting him know that she was "proud" and that his mother Donda West, who was a professor of English, would be too.