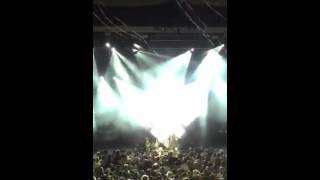 Legend performed a House remix of the classic song.

The R&B star performed an upbeat House version of the song, while the crowd sang along.

Kygo also posted a picture of the two working in the studio together on Instagram, suggesting new music might be on the way.

Meanwhile, John Legend recently announced that he and his wife Chrissy Tiegen are expecting a baby together.

The couple have been trying for a baby with no luck for five years, but let the world know about their happy news.