Afrobeats stars complain about treatment by the awards show.

Fuse ODG has spoken out about the treatment of African and UK artists by the BET Awards.

The Afrobeats star complained that the winners of the International UK and Africa categories do not receive their awards during the televised ceremony.

Dear @BET, the reason why I didn't come is because you give our awards backstage! You have no respect for our hard work and achievements

While he was nominated for Best International Artist: UK, Fuse ODG did not attended the awards, playing a surprise set at Glastonbury instead. He lost out to UK grime MC Stormzy who received his award before the show.

Photos: All The Photos You Need To See From Inside The 2015 BET Awards

The British-Ghanaian singer joins a growing number of Afrobeats artists that have taken issue with the awards. Nigerian popstar Yemi Alade also criticised the BET Awards for sidelining African artists. In a post on Instagram, Alade wrote: “By the way…@bet_intl AFRICA IS NOT A COUNTRY.!!! ..IT IS WRONG TO NOMINATE HUGE AFRICAN STARS AND PUBLICLY TRY TO HUMILIATE AFRICA.WHY ON EARTH IS THE AFRICAN CATEGORY OF THE AWARDS HELD HOURS BEFORE THE “MAIN EVENT? IF AFRICAN ARTISTS ARE NOT WORTHY IN YOUR SIGHT.” 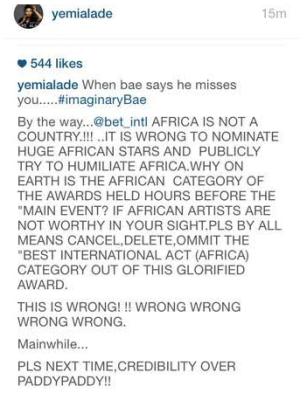 The ‘Johnny’ star choose to boycott the awards, having been nominated for Best International Artist: Africa which was won by Ghanaian singer Stonebwoy.

Fellow nominee and past winner Wizkid also declined to attend the BET pre-shows and nominees party, although later appeared at the show. “I won’t be attending ur preshows and nominee parties if I’m getting the award at 10am before the main show,” he tweeted.

Lol So I'm hearing BET is mad cos I didn't come for the pre shows and interviews! Lol.

The Nigerian star won Best International Artist: Africa jointly with Sarkodie in 2012. He revealed in a series of tweets that he refuse to pickup his award backstage.

But I won't be attending ur preshows and nominee parties if I'm getting the award at 10am before the main show.

I love u BET! If I'm in the city when next u doing the award show , I'll still come to watch. Lol

Wizkid was nominated for this year’s award together with Stonebwoy, Yemi Alade, Sarkodie, AKA, Fally Ipupa, Sauti Sol and The Soil.

BET has not responded at the time of writing.