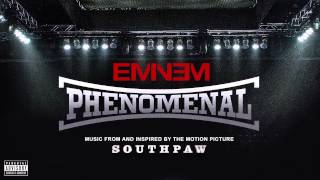 Shady is producing the soundtrack for the upcoming boxing flick.

Eminem has dropped his new single 'Phenomenal' from the 'Southpaw' soundtrack.

The Detroit rapper is handling the music for the upcoming boxing flick, due out in July. He was originally billed to take the leading role but was replaced by Jake Gyllenhaal, with 50 Cent also starring.

Shady’s own contribution is produced by DJ Khalil and features an empowering message that would fit a training montage perfectly. It’s not the first time the ‘Lose Yourself’ rapper has soundtracked a film, having produced and featured on the soundtrack of his biopic ‘8 Mile’ back in 2002.

'Phenomenal' is the first new material Eminem has released this year, following on from his greatest hits in November.

Listen to Eminem - 'Phenomenal' above.