Drake Reportedly Spends Over £500 At Nando’s After Leeds Show

You know when that Hotline Wing...

Drake reportedly spent over £500 at Nando’s after his recent show in Leeds, treating his tour crew to plenty of chicken.

The ‘One Dance’ singer performed at the First Direct Arena on Thursday 9th February, before heading into the Briggate branch at 10.30pm for a cheeky meal.

According to a member of staff at the shop, Drizzy ordered £534.55 worth of chicken and sides!

Check out the receipt below: 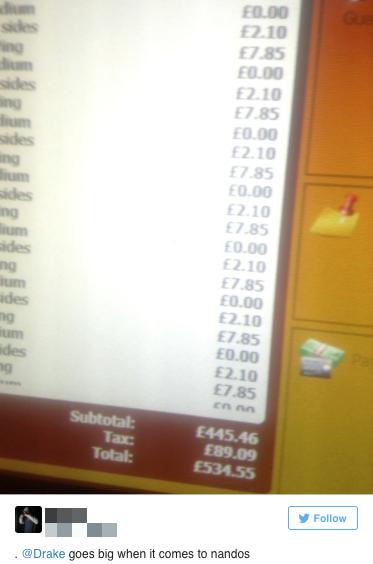 The huge request led to delays at the Nando’s as fans had to wait for Drake’s order to be finished.

Even Nando’s saw the funny side.

.@Drake back at it again with the Hotline Wing...

Meanwhile, Drake is still on his European The Boy Meets World tour, with the rapper set to release his new playlist project “within the next two weeks”.