Breezy has had enough.

Chris Brown has unleashed a passionate rant against Kanye West following his controversial comments about slavery being a choice.

The R&B singer, who collaborated with Kanye West on 2016 song ‘Waves’, took to Instagram to vent his anger and frustration at the Chicago rapper.

“THIS MAN IS A CLOWN! OUR SONG JUST WENT PLATINUM BUT FUCK THAT,” he wrote.

“PLEASE BLACK PEOPLE… DO NOT FOLLOW THIS NI**A ON HIS PATH TO DESTRUCTION! WHATEVER HELP U THINK I NEED… GET IT FOR HIM ASAP! IMA FAN OF THIS MANS MUSIC SO WHAT HE SAYS IS LISTENED TO AND INTERNALIZED. WAKE THE HELL UP KANYE…PLEASE. SLAVERY WAS A CHOICE???????? What??????” 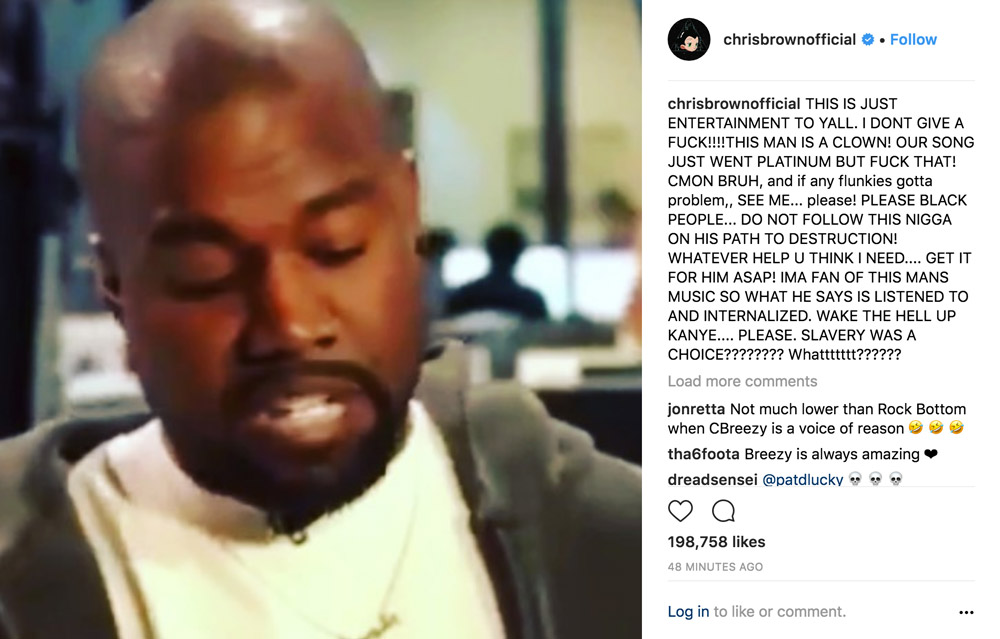 Instead, he posted a video of Will.I.Am responding to Kanye West’s controversial slavery comments.

HE ARTICULATED THIS A LOT BETTER THAN I COULD’VE. I DELETED MY POST BECAUSE OF THE IGNORANCE IT REPRESENTED WITH MY DELIVERY. I WANT KANYE TO SHINE AS A LEADER, NOT FLICKER AS PAWN.

Interestingly, Kanye West has since deleted his tweets defending his comments about slavery being a choice.

Meanwhile, Chris Brown has collaborated with Joyner Lucas on new song ‘I Don’t Die’, which is taken from their upcoming joint mixtape ‘Angels & Demons’.